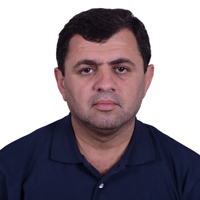 He began his artistic career in the theater field in 1992. He founded the Kurdistan Art Band and headed it for two sessions. He was director of the Kurdistan Islamic Union radio station in Duhok and editor of the Rassan newspaper and the magazine of Rassat al-Haq in Erbil. He worked as a reporter for Germany Radio and for Islam Online website and the Kuwaiti magazine “Al Mojtamaa’” (Society) from 2000 until 2003, and then as a correspondent for Al Jazeera since 2003 until now, during which he presented hundreds of television reports in Iraq, Syria, Turkey and South Sudan, and worked on a number of documentaries presented on Al Jazeera Channel. Author of articles and has a collection of books published in Kurdish and Arabic. These include stories, novels and media writings.

1- Writer of articles since 2000 2- TV correspondent for Al Jazeera since 2003 3- writes in the areas of novel, story and theater since 1999 and has books in Kurdish and Arabic 4- Correspondent of newspapers, magazines, sites and radio stations between 2000 and 2003 5- Making documentary films for Al Jazeera Channel and others. 6- Offered several courses in Erbil, Dahuk and Sulaymaniyah for the production of TV news report