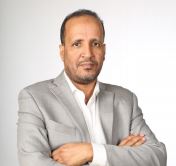 Mohammed Mukhtar Al Khalil was appointed Director of Al Jazeera Centre for Studies in January 2018. Al Khalil holds a PhD in political science with a specialization in political geography. His Master's degree is also in political science with a specialization in constitutional law, and his Bachelor’s degree is in public law with a specialization in international relations. He also holds a postgraduate diploma in general legal studies. Al Khalil’s career in journalism began in Mauritania in 1989. He came to Qatar in 1997 to work as a journalist and later as head of the political section of Al-Sharq daily newspaper. In mid-May 2000, he joined Al Jazeera and co-founded its website, aljazeera.net. He soon was promoted to managing editor in June 2001, and later to editor in chief, in June 2010. In addition to his vast journalistic experience, Al Khalil has experience in academia, training and consultancy in the fields of journalism and political science, especially e-journalism, news editing and the establishment and management of media institutions, as well as international relations and the political geography of the Arab world and West Africa. He has offered several training courses at Al Jazeera Media Institute over the past decade.